Where did this come from? Was it from the movies? Maybe. Was it Detroit’s automobile-obsessed grip on me that made me love this so? There are so many commercials that end this way. Who cares. To this day, I get chills even thinking of it. It’s so perfect.

I am not one for staying in. I never have been. I love to travel for leisure. I especially love to drive. I love to see this beautiful world at my own pace– turning down any side road I choose, and skipping the smooth road for the one with twists and turns. These days, while I am forced to stay inside, I has allowed myself to reminisce.

As a teenager, when I first learned to drive, I had one small desire. It seemed silly, but I was determined to accomplish this one, very important thing. But before I tell you what that was, let me tell you how important that first set of wheels was for me.

I didn’t choose my first car, but rather my mother purchased one for me. It wasn’t fancy. That 1978 baby blue Pontiac Sunbird was a dream, though. White vinyl interior and a (leaky) after-market sunroof, combined with an auto-reverse cassette player (also added after-market), meant I would soon have all the freedom afforded a sixteen year old suburban punk.

My mother purchased the car for me (I know, I was spoiled) mostly to avoid having to drive me to and from play practice, choir rehearsals and work. I was an active teenager, and made sure to stay plenty busy– thus requiring my own set of wheels. And I loved my Sunbird. But it was 1987, and this 11 year-old car had pretty much lost its appeal.

I used to sit in the front seat of that car (before I turned 16) and play music on the stereo. The cassette tape blaring “Bedbugs and Ballyhoo” by Echo and the Bunnymen (my favorite band at the time), or the two cassette pack of Les Miserables (my dream musical at the time), I’m sure raised many eyebrows from the neighbors.

I would rush home after school, and get to work at customizing my new freedom-machine. I remember buying a compass for the dashboard, a detachable mirror for under the visor, and custom (cut to fit) rubber floor mats. I can still smell those mats. All these things I did- before I could even take it out for s spin. My mother had purchased the car in December, and my birthday was in February… those months were painful! And I would sit in that seat. In the driveway.

Once I turned sixteen, we rushed to the DMV, and I returned home with that tiny plastic card that gave me permission to drive. Wow! But, I would have to wait until October to really accomplish my one true desire. And that desire? It was simple, but so exciting.

And then, that fateful Saturday came, and my one true desire as a car owner became reality.

It’s October. It’s early morning. There’s a crisp chill approaching. The trees are gold and red and orange. And they cover the road. There is no end to the road, except somewhere over that hill ahead. And the street? It’s a simple, two-lane highway. Although, you can’t really see the pavement, for it is covered with foliage, having just fallen from the trees overhead. And you are alone. Alone behind the wheel of a slick, 1978 Pontiac Sunbird. It’s rusty, sure. And the white vinyl top is, well, less than spotless. There’s a light fog in the air, the kind only October mornings can promise. And you begin to accelerate. Swiftly you ascend the hill, gaining speed and confidence with every second. And just as you approach the top of the hill, it happens. You lock your eyes on that rearview mirror, and witness the cinematic glory: Thousands, millions, perhaps– of gold, red and green leaves– all trailing behind you, like the wake of a great speedboat on Lake Michigan. They curl and spin, and some even take to the air in a tiny whirlwind– all a result of your ultimate power and control. Amazing. 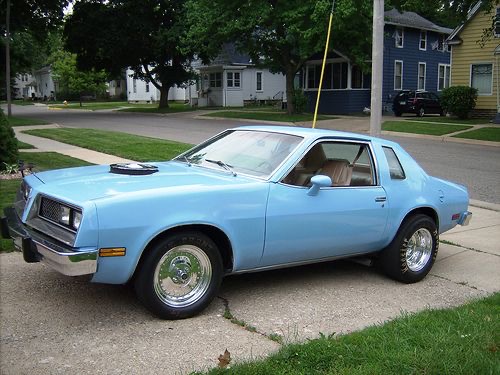 Where did this come from? Was it from the movies? Maybe. Was it Detroit’s automobile-obsessed grip on me that made me love this so? There are so many commercials that end this way. Who cares. To this day, I get chills even thinking of it. It’s so perfect.

And, today, as silly as it is, I still cannot wait for that moment to come again. Sure, it may not happen until October, but I will anticipate that moment until it gets here. And it makes me not hate (quite so much) being stuck inside. For, if I was able to wait all those months to take the wheel of that Sunbird, I can wait now.

One caveat: I no longer drive a 1978 Pontiac Sunbird.

989 Group is a marketing communications agency based in Chicago and New York City.  We help our partners imagine possibilities, tell their stories, build their brands and grow their organizations.